There was something exceptional going on at the Centre de la Photographie stand at Art Geneve in January 2017. People were crowded around a pile of large format (205 x 170 cm) black and white photographs called Ofenpass 2012, unsigned, by Peter Tillessen. Stacked up in a large pile on the floor of the stand was an edition of 6,000 prints. It was a kind of performance, fascinating to watch, where the crowd saw the advertised price of 5 CHF, and then the pile of photographs for sale.

Some people didn’t believe it and walked away, perhaps they thought it was a trick. Others wanted to know more. Why was it so cheap? Several people bought more than one; as gifts, to decorate their son’s apartment at university, or just because it was so cheap. There were many reasons. Some felt guilty about the low price but took advantage of it anyway. Some people could have or should have recognised the image. 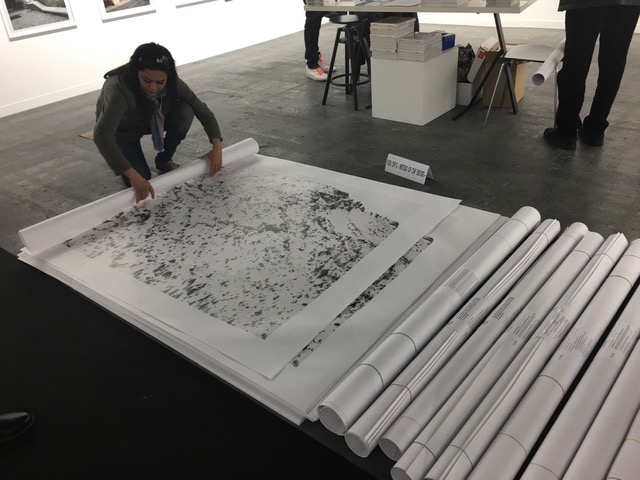 Peter Tillessen, who was born in 1968 in Frankfurt and is now based in Zurich, used the same camera, film, viewpoint, and chose a day with similar meteorological conditions as Gursky to take his image of Ofenpass. He says that he chose the Ofenpass view because he knew it hadn’t changed much, if at all, since Gursky took his image in 1989. Adding to that, was the fact that Gursky is known as the photographer whose work has sold for the highest price in the world.

What does Tillessen’s Ofenpass image say about the value of an image, who owns a view, or the art market itself?

In an interview with Caroline Stevan in Le Temps in November 2016, Tillessen explained that his work is political but with an overlay of irony and of humor. By offering an image that is the same as a famous one, he wanted to see if people would be interested in the image without the baggage of fame attached to it. This is the performance aspect of the work and many people were intrigued by the concept.
In the world of photography, limiting editions of work helps to inflate prices. This is how the market works. But by printing an edition of 6,000 for Ofenpass, Tillessen ensures that anyone who wants the photograph can have it, and at a reasonable price. It democratises photography, so people with fewer resources are not limited to buying their art at IKEA. They have the choice to buy a world-famous image but for only 5 CHF, and not 500,000 CHF.

Another question Tillessen’s work raises is who owns a viewpoint? Just because someone takes a photograph of a street in Hong Kong, for example, or a view in the Alps, do they own that view? Tillessen’s Ofenpass work proves that a view is not owned by anyone. Ofenpass is accessible by road and many people take photos of that particular mountain pass every year. We all take many images every day, so the world is inundated with images. It has been estimated that 1 trillion images are taken every year. Ownership of views and images is a question that will continue to surface, as they have previously with Richard Prince’s “taken” Instagram photos in 2015 and with other examples. The work by Tillessen raises interesting questions and issues surrounding image ownership and accessibility of art for a larger audience. It was a performance worth seeing at Art Geneve.