In 1960s-1970s conceptual artists announced dematerialization of art, they denied  modern art’s status as a commodity, and reduced art to the information value of it’s concept. Despite this pronouncement, in 2017 modern art is still sold and branded.
“Place, product, price, promotion, people” –

the Art Basel marketing mix consists of is its place, the building by Pritzker Prize winners Herzog & de Meuron, the product – works of over 4,000 artists shown by 291 galleries, promotion, exhibitions and events, the best of which is “Unlimited”, and people- staff, gallerists, museum directors, curators, collectors, press and 95,000 visitors.

The branding of “Art Basel“ starts with the eccentric minimalism of Herzog & de Meuron’s architecture, in the covered public square between the northern and the southern entrance. The visitors meet in this open foyer, the “city lounge”, decorated with the brushed aluminum bands décor. This elegant “origami” of twisting bands form the composition of the façade and the entrance, that lead to 50,000 sq m of exhibition space.
Most of the visitors of Art Basel 2017 headed firstly to “Unlimited”, an exhibition of 76 large-scale art works from 100 galleries, a collage of pop art, op art, postconceptual, minimal art, art of 1990s and 2000s – the major component of Art Basel marketing mix. There were no protagonists in the free, extravagant space of “Unlimited”, the same feeling as in a new postmodernist novel, where characters dissolve in the text. “Unlimited is ideal for strong art works as we’re able to emphasize their eccentricity. It’s all about the single work presented in the best possible light”, said its curator, Gianni Jetzer. 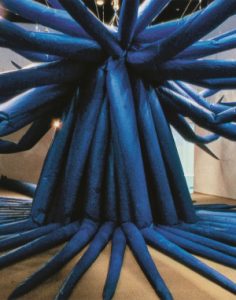 The first image at the entrance, an “introduction” to this non-selective postmodernistic mix was  Otto Pein’s  (1928-2014), “Blue star Linz”, 1980, (blue fabric, electric fan). “Blue star Linz” is a huge inflatable sculpture, a blue rhizome flower, filled with air by programmed blowers. This romantic image, a  dematerialized sculpture, is also a symbol of postmodernism. Rhizome root have no central stem, it has a mass of roots, and was chosen as a metaphor of postmodern thinking by Deleuze and Guattari.  In 1983 Umberto Eco also said that rhizome is an image of symbolic labyrinth of postmodern mentality, and that he was thinking of this image, when he was writing “The name of the rose” novel. 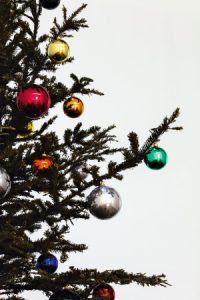 The epistemological uncertainty of Philippe Parreno’s  sculpture of a new year tree “ Fraught Times: For Eleven Months of the Year it’s an Artwork and in December it’s Christmas”, 2017 is also at the center of visitor’s attention. The series Fraught Times consists of 11 cast steel trees.  In December the object stops being perceived as an artwork becomes, in actuality, a decorative Christmas tree. Parreno said: “Today, there are no longer images that are beautiful, there are chains of images.” “What I meant by chain is a dynamic structure that produces forms: pre-production, production, post-production. In the course of the chaining of these sequences, a narrative unfolds. I like meta stories, stories of stories. Is an object always the end of something? Does everything really always start with a scenario and end with an object? Why wouldn’t there be many endings given to stories?”

Literature is read “privately”, and art refers to social interaction. There were many art pieces with social subjects, including the complete furnishings of a branch of a former German chain store Schlecker. This have been transformed into a postmedium installation  by FORT, an artis-duo (Jenny Kropp, b. 1978, Alberta Niemann,b.1982). 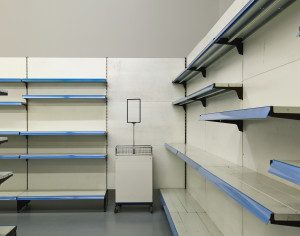 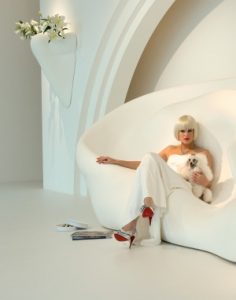 This installation is comprised of a white ear-shaped sofa and two wall-mounted white noses with flowers in a staged setting, made absurd by the presence of a model and a poodle. John Baldessari explained his ears -and -nose series  : “The works actually started in mid-sixties. At that time I had a friend who owned a billboard company. I was getting chopped -up billboards. So I used them as the basis for a series of paintings. Over the years I’ve tended to block out certain features that I feel would normally provide important information – like faces, for example. This leads to the anxiety of not knowing what has been omitted”. 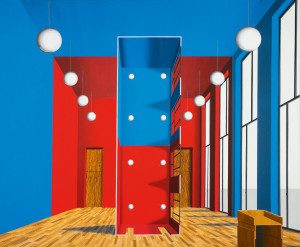 Barbara Kruger deals with social and political issues in her “ Untitled (Our people are better than your people)”, 1994/2017, an all-over composition filled with words and emotions  and showing zero political correctness. Art and language are on the same level in this postconceptual, text based feminist discourse. 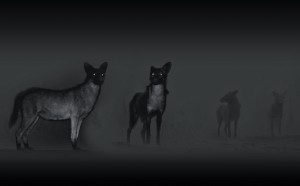 Michal Rovner presented Anubis, 2016 (video, film). The artist worked with Israeli and Palestinian masons. She spent long nights in dark fields, observing jackals. Rovner captured jackals, with their glowing eyes, over the course of a few months with equipment used by security, military, and surveillance cameras. 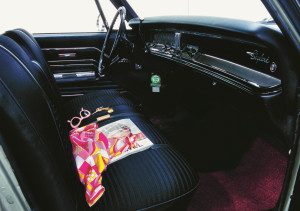 Travelling project of Sylvie Fleury, (b.1961, Geneva), “Skylark”, 1992 project, (1967 Buick, music player, sunglasses, key ring, magazine, makeup) is a ready made with a narrative: in her first exhibition in Geneva (1993), Fleury presented a 1967 Buick Skylark as sculpture. After the exhibition ended, the artist drove the car for many years and it became a central tool in her evolving practice, at Unlimited, the golden Skylark is transformed into a feminist accessory.

The Gurlitt Art Trove and Tracking Down History
"Make Way for Style" - Art of Nabis, Symbolism, Fauvism
POLYGONS & BUTTERFLIES Pavilion Architecture as Testing Ground
Translate »
This website uses cookies to ensure that we give you the best experience on our website.Ok