After the group exhibition at Kunstmuseum Bern titled “The Revolution is Dead. Long Live the Revolution”, Vladimir Dubosarsky talks  with Irina Vernichenko about the paintings he had made in partnership with Alexander Vinogradov and about “What the Homeland Begin With”(2006)

Irina: Does modern art discourse have to be beautiful?

Vladimir Dubossarsky: This was made deliberately beautiful. If we talk about modern art in general it owes nothing to anyone. It can be beautiful or it can be ugly, it can be non-visual.

Modern art has become a long, long time ago much broader than the beautiful picture, or painting or even the message it can communicate. It is so varied in form and content that it represents a very wide spectrum of equal value; so you can speak about beauty or about image, but these are all separate conversations in a much more narrow framework, than the framework of the modern art.

As far as our project is concerned it was evoked by the Soviet project, of socialist realism, and it is closely connected with our history. Well, then who better than us, who’d lived half of their lives in the USSR, can be reflective about it?

If we get rid of the communist ideology, and all the negativity connected with repressions, colossal losses borne by our country, and if we take only the zone of art, then this becomes a very interesting phenomenon,  which in a way is a roll-back from the avantgarde, and from the other side, is avantgarde of the next wave. But this is very controversial  subject. This is all very close and hot and not yet reflected from the point of view of grand art.

Is this a reduction of language or double coding, secondary system?

From the point of the language, it is clear that we have simulated this language, compiled it from several artists. Deyneka, Plastov, etc are the samples which we used as the benchmark to compile a grand style of sorts. This is connected with what’s been happening in our country, the country was falling apart, destruction, no sense of direction, and all the past is covered with dirt.

A unique language was created, and a unique style (socialist realism) which was not communicating the truth. It was mythological, it was telling myths.  It is the myth creation and it could tell myths.

Wheat was most important in cooperation with Alexander Vinogradov?

We’ve been working together for 20 years and there have been advantages in this. Advantages of working in a group of 2-3 people is the group’s energy increases not just twofold, but in geometric progression, which is difficult to calculate. Today someone’s mood or vision improved,  you’re offering something and you’re being offered in return, a chain  occurs, that one man cannot manage alone, this enhanced the project quite a lot. We had big paintings, so speed was essential. Generally speaking, speed is one of our utmost ingredients, because the world had changed, it’s become technological. We always said that we do not produce “paintings”, we make pictures. Our format was big pictures. They had to be bright.

Beauty is one of the mechanisms of a myth. Myth is a bit more beautiful than the real life. That’s why we amplified all this, made it maximum beautiful, maximum bright, maximum funny. We tried to kind of  break the existent boundaries, tried to combine the incompatible, mixed socialist realism with Hollywood, glamour media, modern tech, trends; filled with allusions towards art and history, world history and Russian history. And we viewed it all through a humorous prism, not jokingly, as these things are serious, but with some skepticism as this is not real.

Socialist realism is fantasy, it has nothing to do with the reality, and the workers, and the war, and all that was depicted were not true. And we have been in a sense producing non-truth, but there exists a non-truth that is higher than truth, there is the non-truth that becomes super-truth. And these paintings in a certain sense speak more of that time than if we had painted the things happening on the streets, as it was total madness, we were participating in exhibitions called “Russian Madness”. In a way it was Russian madness, Russian unconsciousness and the presence of western influence.

By the way, have a lot of gimmicks that cannot be read in the West: like a cigarette  with lipstick, this is the theme of Magadan, Stalin repressions. In the West it is construed as a cigarette  in a beautiful dirt. 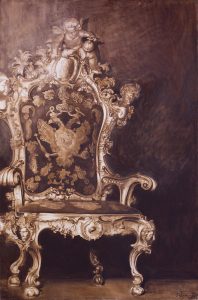 Art is viewed as fictional discourse, was the partnership also a fiction?

When we stopped working together questions started to being asked like ‘what am I going to do?’ and ‘What was my input?’ and ‘What am I going to do next?” I myself have not fully answered these questions, I work a lot, some things echo what was before, some are absolutely different. In a way, I am in a very comfortable situation, as a young artist, when you can experiment, observe.  I decide to stop at some point or choose not to, and maybe to continue to glide is the right thing to do.

Time’s changed, it’s not about the partnership, it had crumbled because of the loss of common vision not only of the project itself, but of the way we see the world as a whole. We began seeing the world differently and could not come to agreement on how we view the art; Alexander had his vision and I had mine.

When we started, we both had the right of veto, when one did not like something, he simply said “no”, and there was no discussing it; it’s clear that one can convince the other, and many time we were able to do just that, but in principle he would say that “no, you have not convinced me”, and that was it.  If we were three, we could have voted.  And yes, a lot of things were not done.

Over the years I have grown accustomed to say ‘us’ and at all times tried to take into consideration my partner and his way of thinking so that now I feel much more comfortable as this gives me more possibilities to experiment, do individual projects, I’ve become more mobile. It’s all connected with the life itself, with reality, before you had to spend more time together, discuss, be in time for the meetings, now it is more difficult to get together, discuss things, no more drive on the level of coming up with the ideas. The world has changed, the art has changed and we have to change, or may be we do not have to. And you have to do what is interesting. When you do things which are uninteresting, you never succeed, whereas when you do things that are of interest, you may either succeed or not.

Martha Fiennes : Yugen means to have a grasp of understanding as to a profound, subtle, mysterious c...
Interview with Michal Rovner - Leaving a Permanent Mark
Interview with Monique Deul of Taste Contemporary Craft