Chaplin’s World is an hour from Geneva, and a world away from everyday life. Without knowing much about Charlie Chaplin beyond that he made silent films and was known as “The Little Tramp”, I found out what I had been missing at Chaplin’s World. As Chaplin put it, “A day without laughter is a day wasted” and his love of life and passion for his work is evident at the museum. It is an immersive and interactive experience. In fact, the museum won third place in the Innovation category at the Milestone Excellence in Tourism awards in Bern on November 15, 2016 — well-deserved recognition of a beautifully-presented homage to the one-man show that was Chaplin.

Chaplin’s World is divided into two parts; the Studio, and the Manoir. The Studio is a newly constructed modern building housing a huge collection of Chaplin memorabilia and artifacts. Film sets from many of Chaplin’s most popular films have been recreated, including “The Kid”, “The Circus”, and ” Modern Times”. The tilting cabin from “Gold Rush” which created such chaos in that film is there and you can try it for yourself. There are thirty extraordinarily life-like wax figures which include depictions of many of the people Chaplin met or worked with such as Gandhi, Churchill, Paulette Godard, Buster Keaton, Sophia Loren, Woody Allen and Michael Jackson. Michael Jackson was a huge fan of Chaplin’s and even created his famous moonwalk dance after watching Chaplin do a similar movement in one of his films. The wax figures, made by Grevin, the Paris wax museum, bring the sets to life, alongside film clips and original costumes. Even the Oscar that Chaplin won for “Limelight” is there.

The Manoir du Ban is the 14-hectare estate where Charlie Chaplin and his wife Oona and their eight children lived for the last 25 years of their life. Decorated with much of the original furniture, the ground floor is left as it was when he lived there. The dining table is set for a large dinner party. Apparently, Chaplin never learned French, and only English was spoken at Manoir du Ban dinner parties. Upstairs in the Manoir the rooms have been re-staged as film sets and family photographs cover the hallway walls. A family tree shows all the wives (Chaplin had 4) and children (he had 11) and grandchildren. Surrounding the Manoir is a beautiful park with a walking path and stunning views of the lake and mountains. One can understand why Chaplin choose to spend the last twenty-five years of his life here.

But why was Chaplin in Switzerland? After all, Chaplin was born in South London in April, 1889 and, after moving to the United States, he had a very successful career in Hollywood, California. Creating and starring in 62 films, Chaplin was recognizable all over the world as the little tramp, wearing a black suit, clown-like shoes, and carrying his famous bendy bamboo cane. His silent films didn’t need language to communicate the perfectly-executed physical comedy that Chaplin pioneered. Chaplin said “I went into the business for the money, and the art grew out of it. If people are disillusioned by that remark, I can’t help it. It’s the truth”. 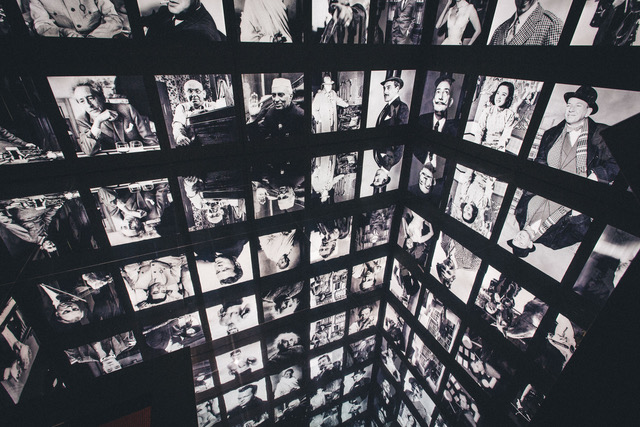 He met Oona, daughter of Pulitzer-prize-winning playwright Eugene O’Neill, when she auditioned for one of his films in Hollywood, and he married her when she turned 18. Despite the 36-year age difference between them they remained married for the rest of their lives. All did not go entirely smoothly for Chaplin, however. In 1952, during the McCarthy era in the United States, politicians searched for and criminalized anyone expressing alternative political views. Chaplin made a few unwise comments to the press and, after a trip to London, Chaplin’s U.S. re-entry visa was cancelled, effectively barring him from returning home. Rather than fighting the ban, Chaplin and Oona decided to move permanently to Switzerland, and found the Manoir du Ban in Vevey. Chaplin died there on December 25, 1977, at age 88.
The story of how the Chaplin museum came into existence started when Swiss architect Philippe Meylan, and the Québécois film buff and Chaplin artifact collector Yves Durand met in 2000 and hatched the plan to make the Chaplin museum. The plan really got going in 2008 when Luxembourg-based Genii Capital invested. In January 2014, a partnership agreement was signed between Companie des Alpes (experts in museum operations and management) and Domaine du Manoir du Ban (Genii Capital and Chaplin Museum Development) to launch the Chaplin’s World Museum. After many years of planning and delays due to a lawsuit brought by the neighbors, the museum finally opened on April 17, 2016.

Chaplin’s World offers an immersion into the unique world of Charlie Chaplin, a one-of-a-kind entertainer who influenced countless actors and singers who came after him. When you want to escape from reality for a little while, the home of Chaplin offers just that. Chaplin once said “I have many problems in my life. But my lips don’t know that. They just keep smiling.”